The Great Pyramid of Giza is the largest Egyptian pyramid and the tomb of Fourth Dynasty pharaoh Khufu. Built in the early 26th century BC during a period of around 27 years, the pyramid is the oldest of the Seven Wonders of the Ancient World, and the only one to remain largely intact.The Great Pyramids were simply grand tombs of powerful pharaohs. Three pyramids were built at Giza, and many smaller pyramids were constructed around the Nile Valley. The tallest of the Great Pyramids reaches nearly 500 feet into the sky and spans an area greater than 13 acres. They were built for Pharaoh Khufu (Cheops, in Greek), Sneferu’s successor and the second of the eight kings of the fourth dynasty. Though Khufu reigned for 23 years (2589-2566 B.C.), relatively little is known of his reign beyond the grandeur of his pyramid. It was the Egyptians who built the pyramids. The Great Pyramid is dated with all the evidence, I’m telling you now to 4,600 years, the reign of Khufu. The Great Pyramid of Khufu is one of 104 pyramids in Egypt with superstructure. And there are 54 pyramids with substructure. 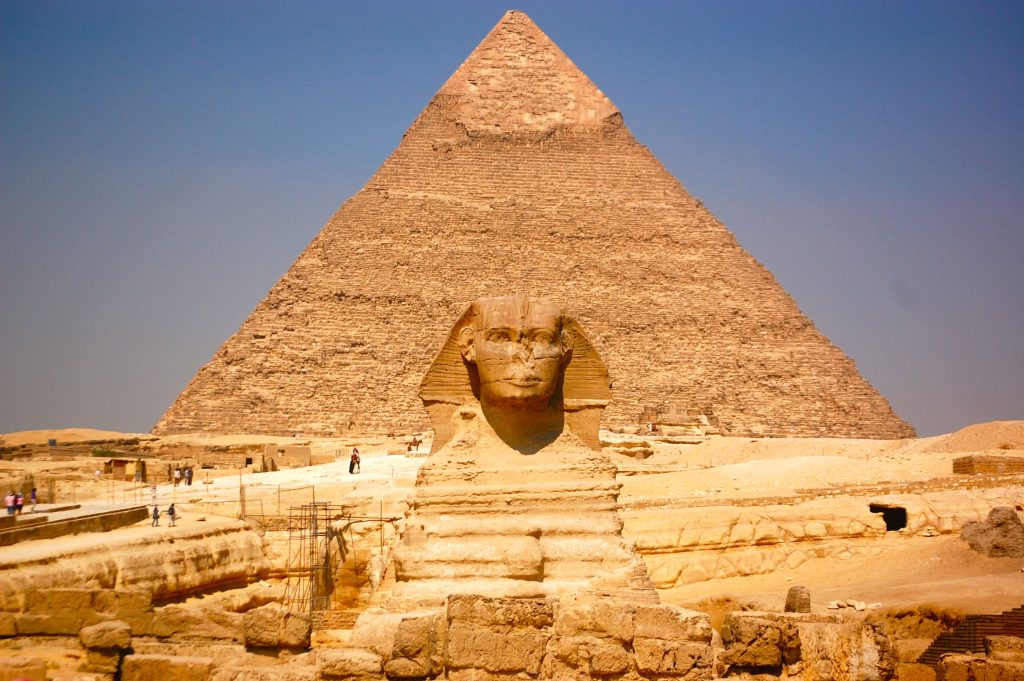 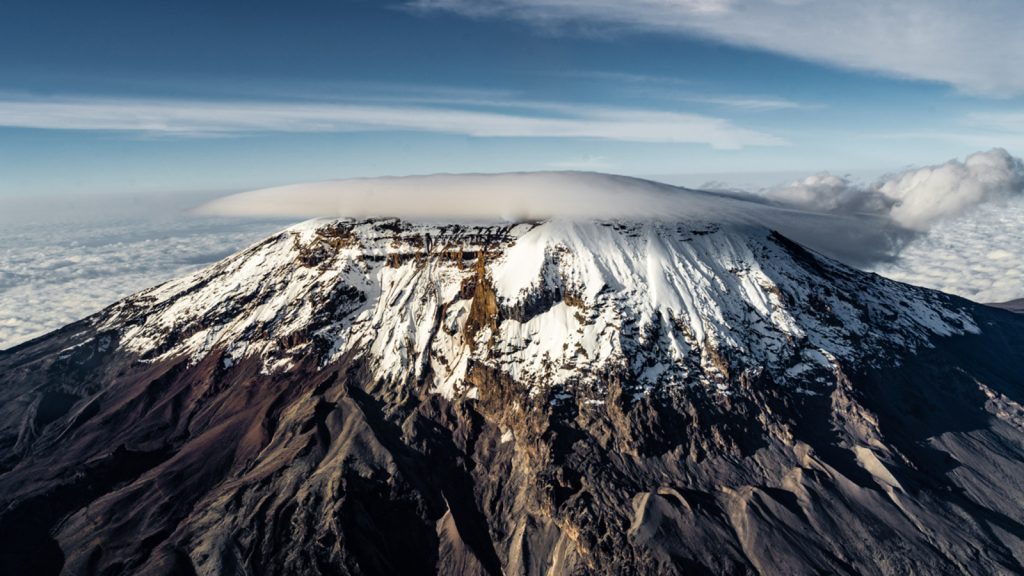 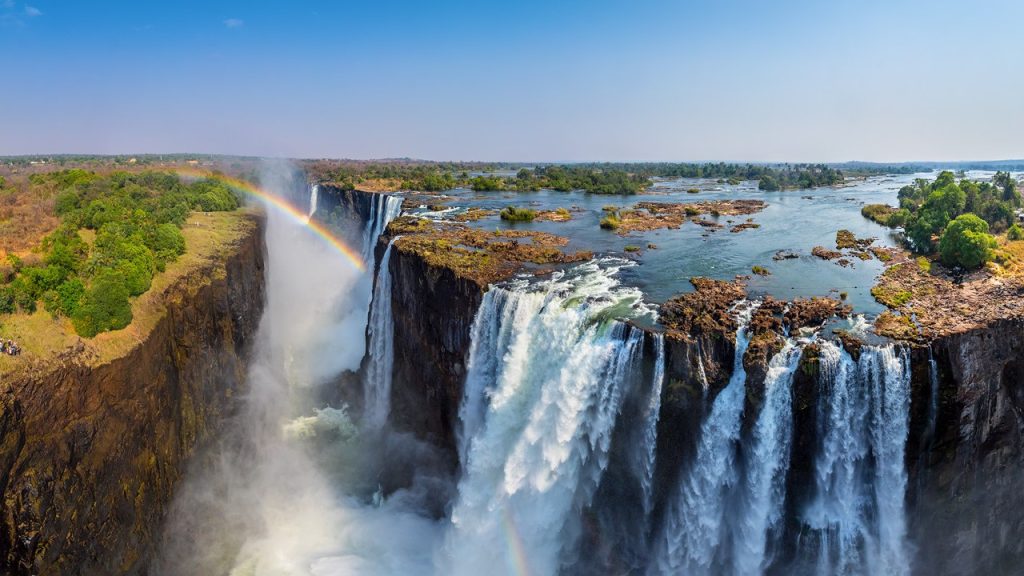 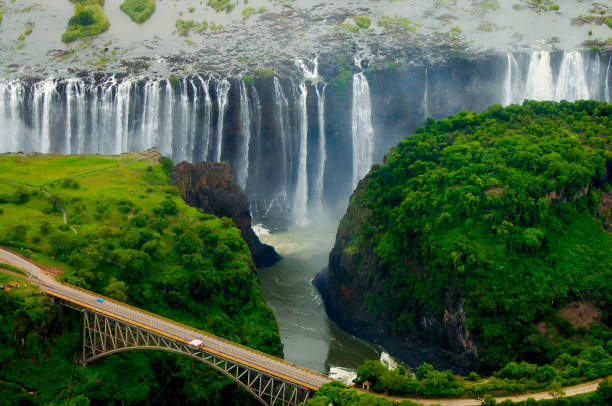 The Fish River Canyon, is located in the south of Namibia. It is the largest canyon in Africa, as well as the second most visited tourist attraction in Namibia. It features a gigantic ravine, in total about 160 kilometres long, up to 27 km wide and in places almost 550 meters deep. 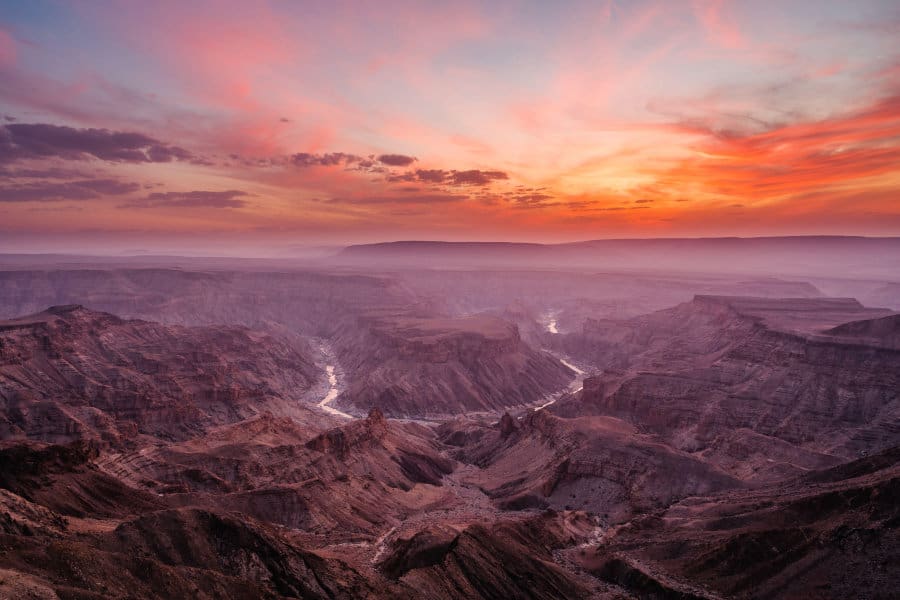 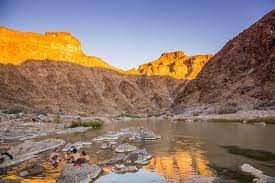 Nyika National Park is in northern Malawi, on the Zambian border. On the high-altitude Nyika Plateau, the park encompasses grassland and wooded valleys. Mountain-bike tracks and footpaths offer views of wildlife such as elephants, zebras, antelope, bushbucks and leopards. Rich birdlife includes rare species like wattled cranes and red-winged francolins. Seasonal orchids and other wildflowers dot the land scape. Nyika is Malawi’s largest park, with an area of no less than 1250 sq miles (3200 sq km) extending across the great Nyika plateau, which is a granitic dome contains the flora of the plateau include gladioli, delphiniums, lobelia, and ‘red hot pokers’. The plateau is also home to around 200 species of orchids. Groves of montane forests also dot the plateau, famous for the highest densities of leopard in central Africa and there are good sightings particularly in the forest behind Chelinda Lodge. Hyena and jackal are occasionally seen and there are a number of species of smaller mammals such as warthog and bush pig. 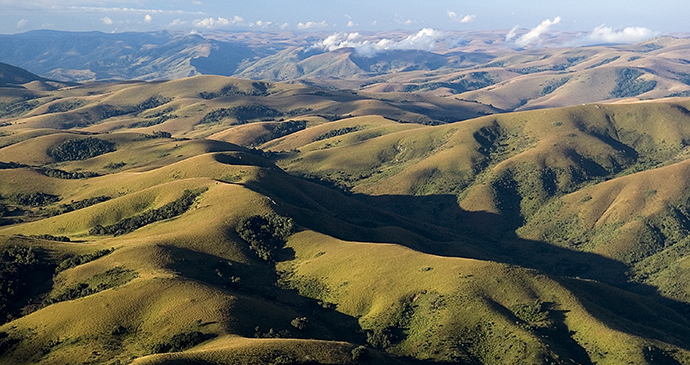 The Bazaruto Archipelago is a group of 6 islands off the coast of southern Mozambique. They lie within Bazaruto National Park and are known for their white-sand beaches. Bazaruto, with sand dunes, is the largest island. Coral reefs around Magaruque and Santa Carolina islands protect rare marine animals, like dugongs. The wetlands, forests and grasslands of Benguerra Island’s interior are home to many bird species. The idyllic islands of the Bazaruto Archipelago in Mozambique are known for their un-spoilt beauty and diverse ecologies. The pristine coral reefs are home to more than 2000 fish species as well as whales and dolphins. 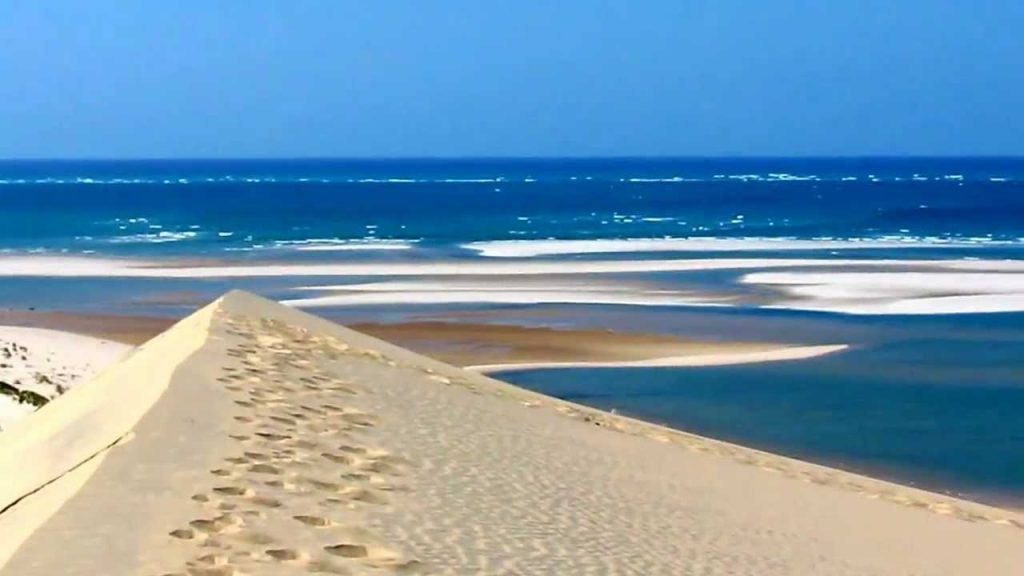 The Red Sea is an inlet of seawater in the Indian Ocean that is located between Asia and Africa. The Gulf of Aden and the Bab el Mandeb strait connects the Red Sea to the ocean. The sea is underlain by the Red Sea Rift which has been selected as one of the Seven Wonders of Africa. The Red Sea occupies an area of 169,000 square miles and is 1,400 miles long and 221 miles wide. The Red Sea’s maximum depth is 7254 feet. The extensive network of shallow shelves of the Red Sea is noted for the corals and marine life. Over 1,000 species of invertebrates and 200 hard and soft coral species live in the Red Sea. Around 10% of the more than 1,200 species of fish found in the Red Sea are endemic in nature. The fringing coral reefs of the sea are about 5,000 to 7,000 years old and formed primarily of porites and acropora corals. The reef habitat is associated with various features like platforms, lagoons, cylinders, etc. Nearly 44 species of sharks visit the reefs of the Red Sea. 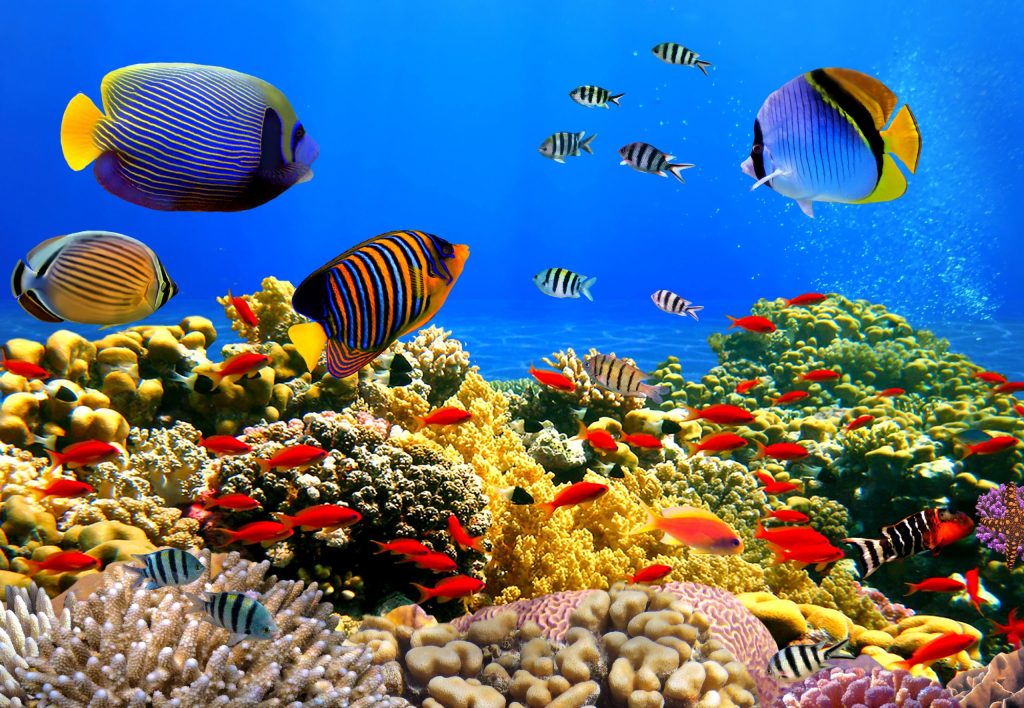 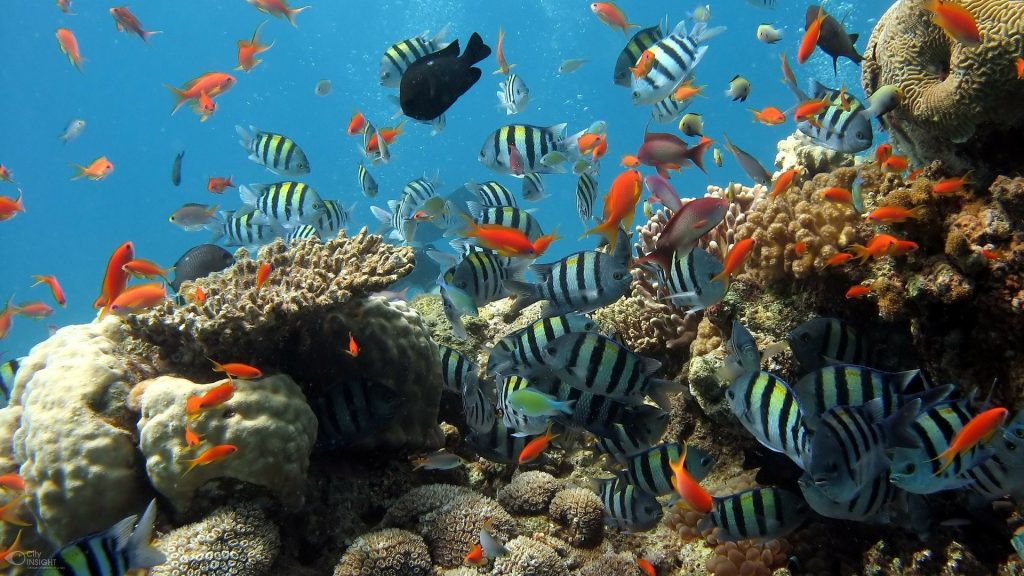 The Sahara is a desert on the African continent. With an area of 9,200,000 square kilometres, it is the largest hot desert in the world and the third-largest desert overall, smaller only than the deserts of Antarctica and the northern Arctic. The Sahara desert covers 10 different countries. they are Algeria, Chad, Egypt, Libya, Mali, Mauritania, Niger, Western Sahara, Sudan, and Tunisia. Sahara dessert has a few facts you need to know like the Saharan Dunes can reach 180 metres in height, Many dinosaur fossils have been found in the SaharaEmi Koussi Volcano is the highest point in the Sahara at 3,415 metres and animals like Monitor lizards, camels, foxes and gazelles live in the Sahara. 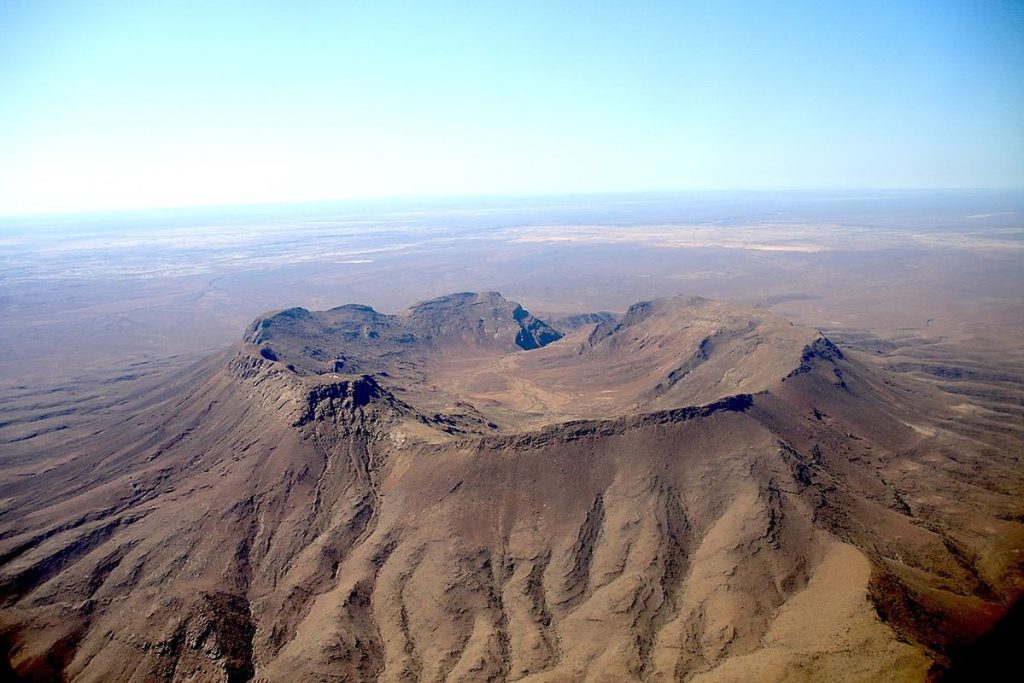 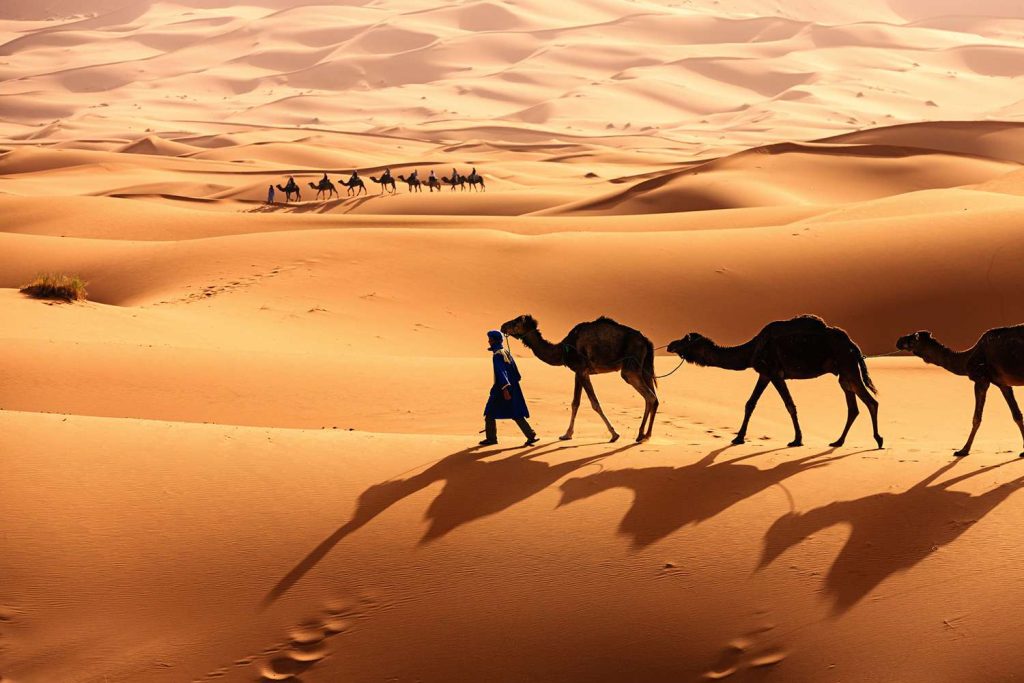 The Nile is a major north-flowing river in northeastern Africa. It flows into the Mediterranean Sea. The Nile is the longest river in Africa and has historically been considered the longest river in the world, though this has been contested by research suggesting that the Amazon River is slightly longer. River the most powerful waterfall in the world. Every second, the equivalent of 200 bathtubs full of water is forced through a gorge less than seven paces wide. The pressure is so great that the ground trembles around it. 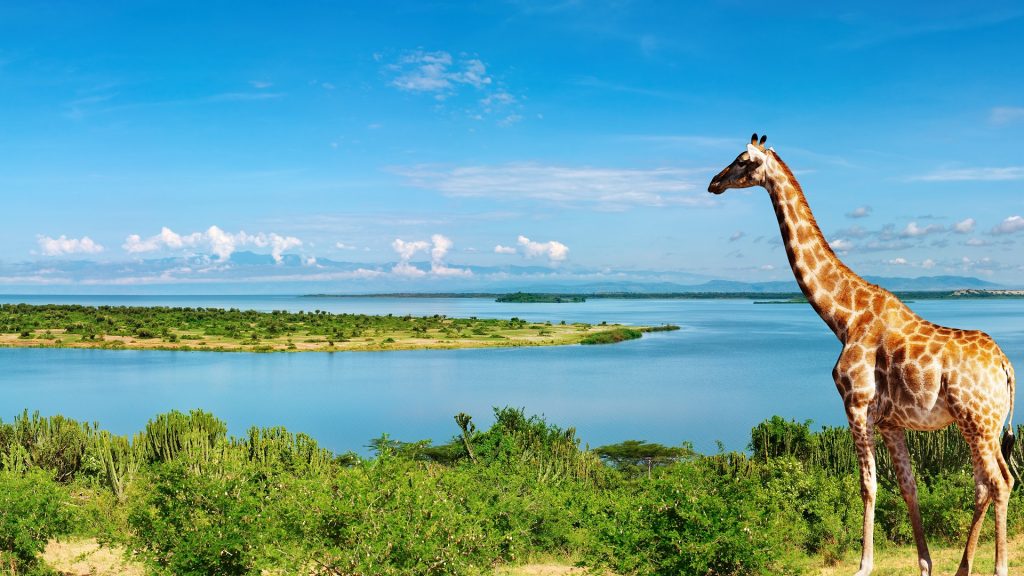 The Okavango Delta is a vast inland river delta in northern Botswana. It’s known for its sprawling grassy plains, which flood seasonally, becoming a lush animal habitat. The Moremi Game Reserve occupies the east and central areas of the region. Here, dugout canoes are used to navigate past hippos, elephants and crocodiles. On dry land, wildlife includes lions, leopards, giraffes and rhinos. What is so special about the Okavango Delta is one of a very few large inland delta systems without an outlet to the sea, known as an endorheic delta, its waters drain instead into the desert sands of the Kalahari Basin. It is Africa’s third largest alluvial fan and the continent’s largest endorheic delta and the largest wetland freshwater  in Southern Africa, the Okavango Delta is not only Botswana’s national treasure, but also a critical natural resource to the wildlife and communities in neighboring Angola and Namibia. it is also a home to mammals inluding Bush Elephant, African Buffalo, Hippopotamus, Lechwe, Topi, Blue Wildebeest, Giraffe, Nile crocodile, Lion, Cheetah, Leopard, Brown Hyena, Spotted Hyena, Greater Kudu, Sable Antelope, Black Rhinoceros, White Rhinoceros, Plains Zebra, Warthog and one of the world’s greatest wetland sanctuaries – a rich, diverse and pristine wilderness- the Okavango Delta offers excellent birding opportunities. This magnificent World Heritage Site boasts more than 400 recorded species of birds. It is not uncommon to spot around 140 specifies in a day. the birds of Okavango delta include; Pels fishing owl, African jacana, Slaty egret, white -backed night heron, malachite king fisher, wattled crane, pygmy goose 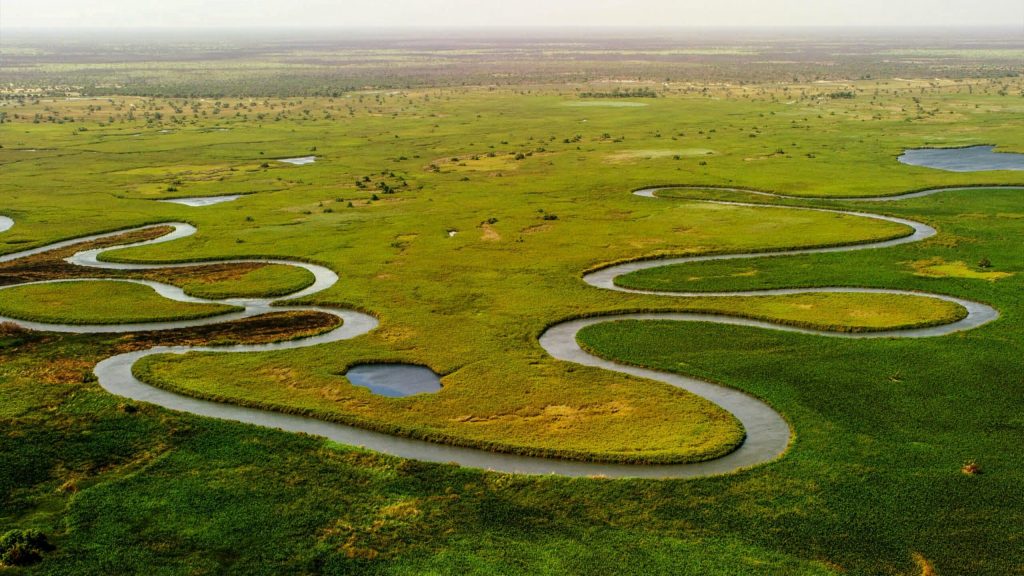 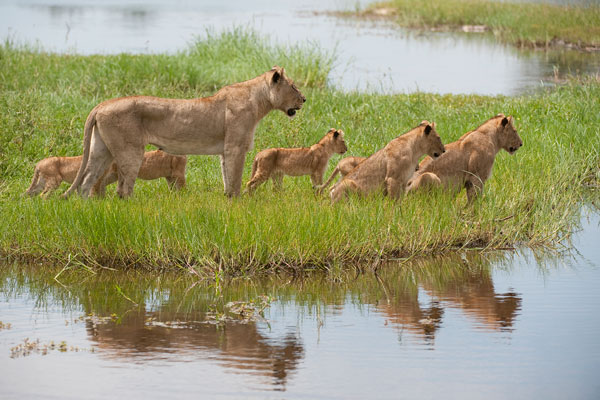 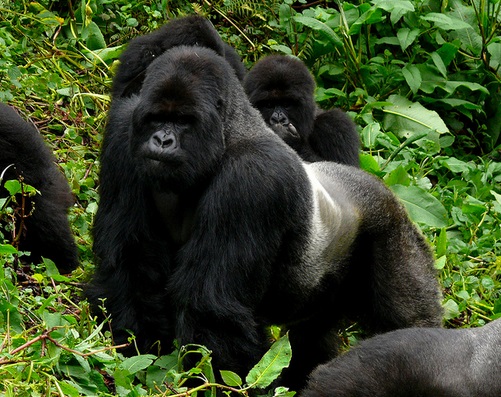 Africa’s race for life. The journey for the key players in the Great Migration, the roughly two million wildebeest, starts in the south of the Serengeti, The Great Wildebeest Migration is the largest animal migration in the world. Every year, more than 2 million animals (wildebeest, zebra, and gazelle) migrate in a clockwise direction across the ecosystems of the Serengeti (Tanzania) and the Masai Mara (Kenya).They migrate throughout the year, constantly seeking fresh grazing and, it’s now thought, better quality water. The precise timing of the Serengeti wildebeest migration is entirely dependent upon the rainfall patterns each year 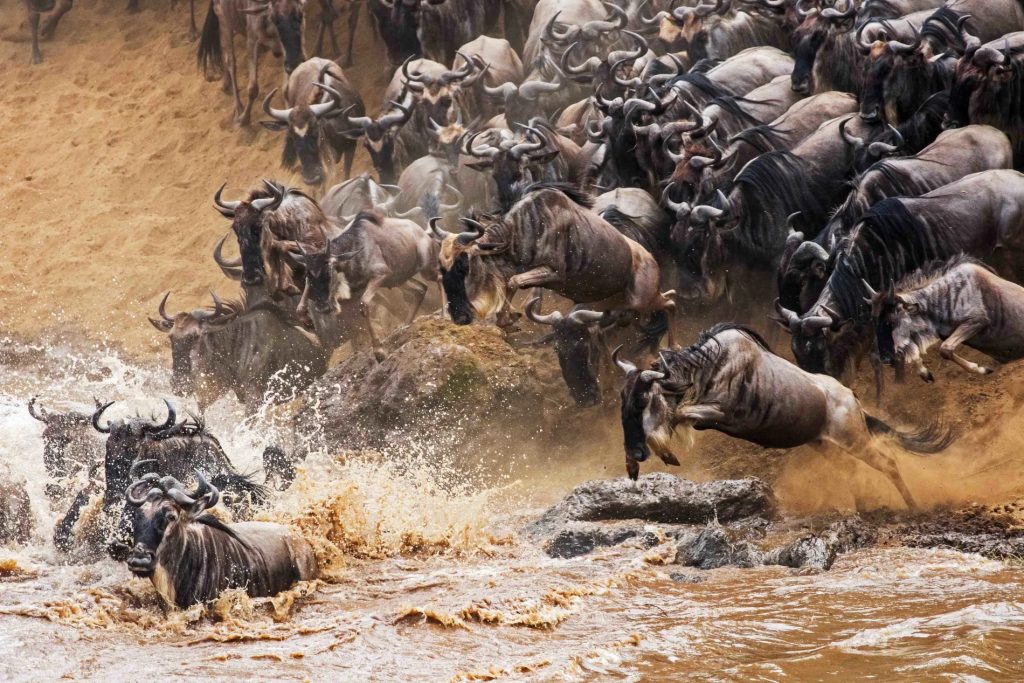 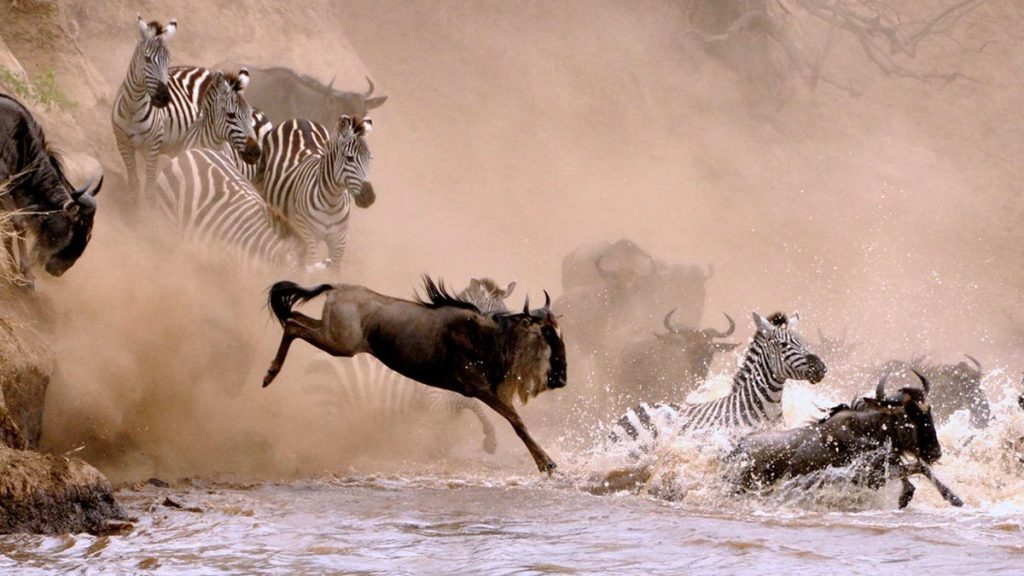 The Virunga Mountains are a chain of volcanoes in East Africa, along the northern border of Rwanda, the Democratic Republic of the Congo, and Uganda. The mountain range is a branch of the Albertine Rift Mountains, which border the western branch of the East African Rift. The Virunga Mountains also known as the Virunga Massif offer one of the most unique tourist attraction sites in Africa. It is commonly known for being a home to the golden monkeys and the endangered mountain gorillas. 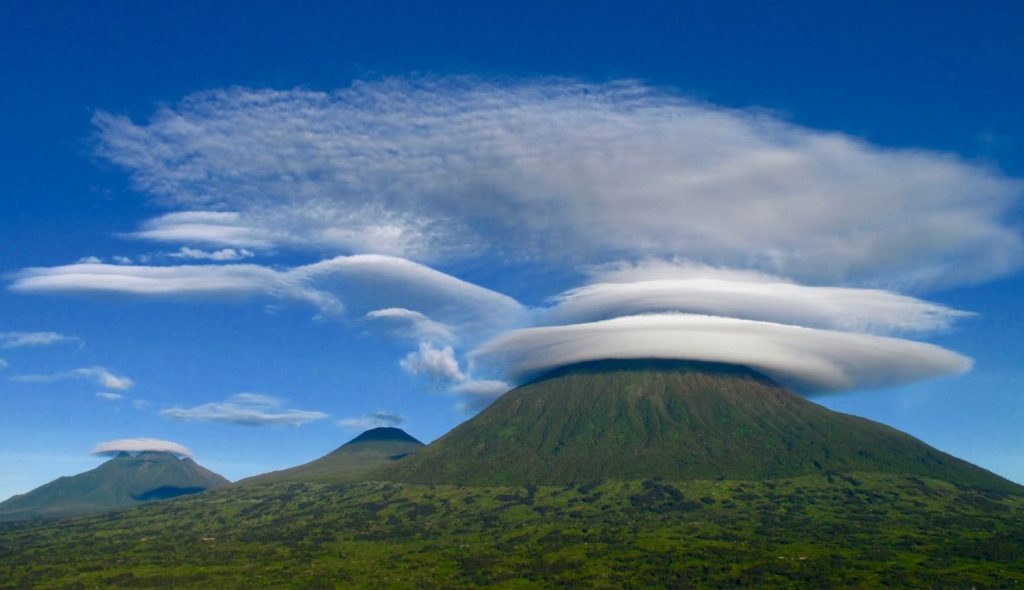 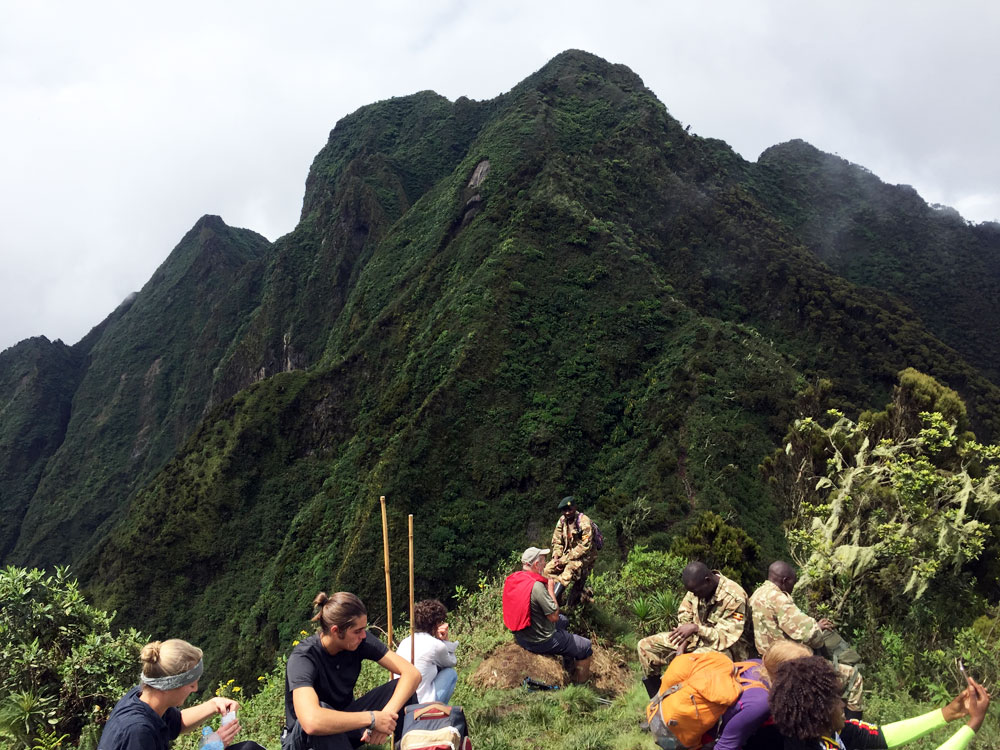